As we reflect on 2016, and its highlights below, we are thankful for so many blessings within the Phi Delt Nation. Most importantly, our momentum to transform Phi Delta Theta as a values-based leadership society is continuing because of loyal alumni, undergraduates and friends. We thank each and every one of you and ask that you consider a year-end gift to our Foundation to help us continue our momentum.

Thank you and we wish all of you a Merry Christmas and Happy Holidays!

More than 250 Phis gathered in St. Louis for the Presidents Leadership Conference. The conference remains a staple for equipping chapter presidents with the knowledge and tools they need to succeed in the role.

The flag was planted in six cities (Orlando, San Francisco, Austin, Cincinnati, Philadelphia, Pittsburgh) for the annual Phi Delt Weekends. Each weekend consisted of a networking event, Recruitment Workshop and Chapter Advisory Board Summit. Approximately 800 Phis attended one of the events. 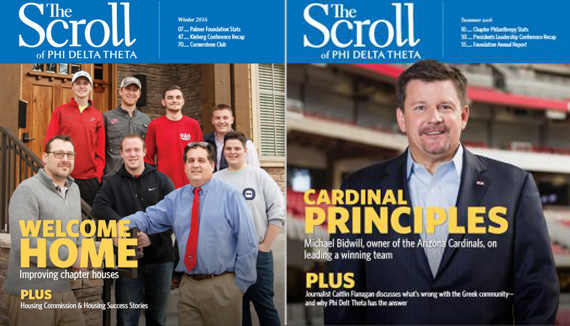 The 81st Biennial Convention was hosted in Savannah, Georgia from June 19-22.

Phi Delta Theta’s collection of awards were presented at the General Convention, including the coveted Harvard, Founders, Kansas City and Housser Trophies.

The 2016 Kleberg Emerging Leaders Institute in Oxford set a new attendance record with more than 900 Phis in attendance. Alongside the normal Kleberg educational track, the conference also hosted the Shaffer Honors College of Leadership and the Phikeia Educators College.

During the Kleberg Emerging Leaders Institute, the Costello-Read Leadership Center at General Headquarters was officially dedicated. Brothers John Costello, Akron ’68 and Roger Read, Akron ’63 generously funded this project. The support also provided for a reclamation of the Assembly Room in the lower level of GHQ as a model chapter hall for Fraternity ritual ceremonies and other activities.

The number of Phikeias recruited during the Fall 2016 semester increased 9% compared to Fall 2015. A collection of 50 chapters on the Fraternity’s recruitment coaching program saw an increase of 22%.

Curtis Granderson of the New York Mets was presented with the Lou Gehrig Memorial Award.

The Iron Phi program surpassed $1 million raised since its inception in 2010. In 2016 alone, 100 Phis became Iron Phis and ~$225,000 was raised to support ALS research and the Fraternity’s educational programs.

Leadership Consultants conducted 341 campus visits, assisting the Fraternity’s chapters and colonies in becoming the greatest versions of themselves.

It’s been a great year, and we haven’t even mentioned the many positive news stories that have been submitted by our members and chapters!